You can say practically anything you want to about showers, but it’s the head that makes it or breaks it. There is probably nothing more relaxing or invigorating than a good shower. And then when you throw in the wide variety of effects that you can enjoy from the different shower heads that are available, you will look forward to hitting the showers. These five most popular selections makes being sent to the showers a good thing. 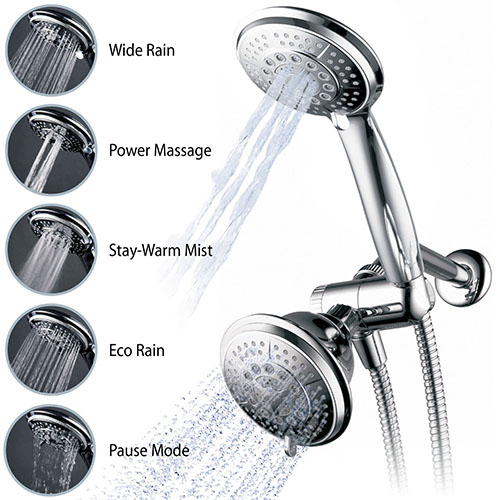 If there’s one thing better than having a shower head that has a variety of flow patterns, it’s having two shower heads with a variety of flow patterns. With this one you are sure to never be at a loss for how you want your body treated. And not only that, but you can have both the wall mounted head functioning at the same time that you have the hand-held busy. Making matters better, each head has five different fully functioning settings, from power rain to pause. That’s 24 possible combinations of flow patterns. Both head faces are oversized too, so you can enjoy more water in each pattern. This head also comes with a steel-reinforced hose for longer life. 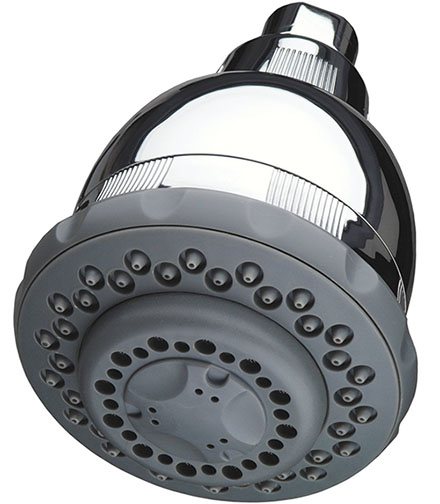 Don’t need a hand-held wand? Prefer a stationary head but you still want variety when it comes to water patterns? You will have them both with this one. This one is so easy to install that you won’t need any tools, and it’s filtered, so99% of the chlorine reducing sulfur odors and scale never reach you. There’s also an anti-clog rubber spray nozzle and 10,000-gallon filter capacity that will keep you singing in the rain forever. 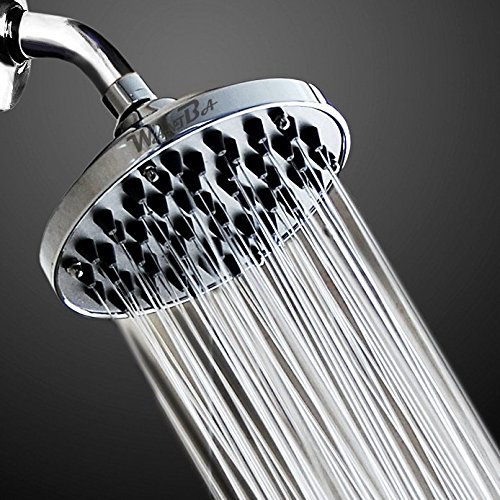 Talk about super deluxe. If you like rain shower heads as well as a large shower head, this one is a great combination of the two. The face is six inches wide, so it will give you lots of coverage, and with the swivel ball attachment device, you can move this one where the water hits you best. It’s easy to install too, on the wall or overhead. It is also easy to take apart, so if you find yourself needing to clean it, one touch will do the trick.

Want to know what it would be like to shower in the space age? This one will give you an idea of it. Not only is there a generous 9-inch wide head that’s full of nozzles, but there’s also a wand with more of the same. The head alone has 118 high efficiency nozzles, while the wand has 60 nozzles. Both can be set to hydrating jet or waterfall. The overhead is easily adjustable. The wand has a steel-reinforced hose for long life. 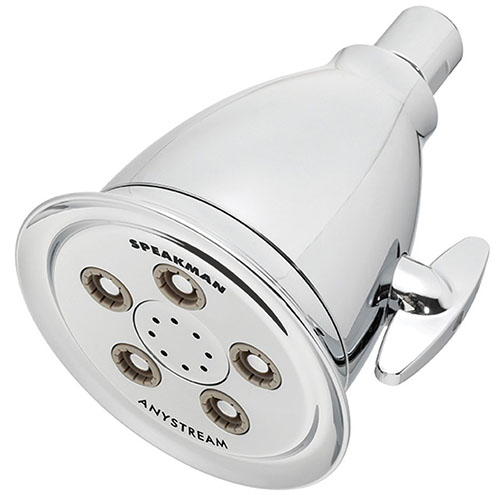 Did you ever get to one of those luxury hotels and end up wanting to take the shower head with you? This one is just one of those wonderful shower heads. This one leaves no guesswork on the kind of stream you want. Just twist the easy-to-grip knob on the side and select the flow you want. The five fully adjustable heads produce 50 individual water streams as well as 8 pulsating massage streams. This is made of high grade plastic, the same as in hotels, so it’s easy to handle and install. The nozzles are all self-cleaning too, so this one is literally an install it and forget it shower head. And this head is a force multiplier, so if you are often troubled with low water pressure, this one won’t let you know it.

If you are looking for a way to take your shower from ordinary to the extraordinary, you owe it to yourself to check out any one of these shower heads. All of them are made with quality and high performance in mind. They’re also easy to install, often without any tools whatsoever. From now on you won’t think of your shower in the same way again. Who will need a spa when you will have a shower head like yours?