Finding just the right beach towel to please every taste is possible. There are hundreds of manufacturers offering many different design collections with varied features. The trick to buying the best is to know what is available, and know what you prefer. Nobody wants to spend money on something that ultimately will not suit them.

Some people are thick towel folks. They are unhappy when their towel is not heavy, plush and absorbent. Others are thin towel advocates. They appreciate that thinner towels have a better chance of drying quickly, and they don’t mind if the towel tends to shed or pill a little. These folks are more interested in the activities than the size or color of their towels.

Lucky for all, is that there is the perfect combination of features for each person, whether it be beautiful colors, inspiring themes or just plain fun images to carry on a fun filled day. These brief reviews will help to give some idea of what is popular and available, and offer some key points to consider before purchasing. Sometimes, what looks the best online turns out to be less quality than hoped for, while other times, the simplest of products ends up being the highest rated and full of excellent quality. 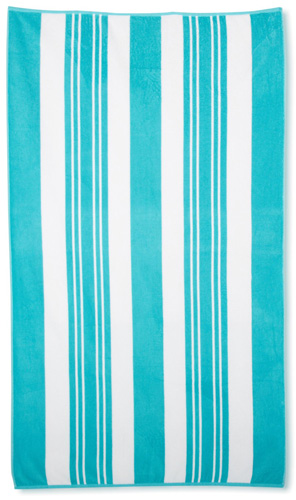 This is a vibrant colored, plush product that has the size to fully wrap around its owner. Its dimensions are seventy inches long and forty inches wide, giving it ample room to spread out during the day or snuggle inside as shoreline temperatures drop later in the day. It is available in six bright vertical stripes, including Bellini Blue, Galleria Grey, Sicilian Red, Orangecello Orange, Limoncello Lime and Melanze Purple. Manufactured with a proprietary weaving process, the softness it offers is the result of combing the terrycloth fabric.

Customers generally have mixed feelings about these towels, citing problems with shedding, fraying along the edges, color bleeding and a lack of ability to absorb moisture. Among those who were somewhat satisfied, opinions ranged from “just so so” to “very good for the price”. 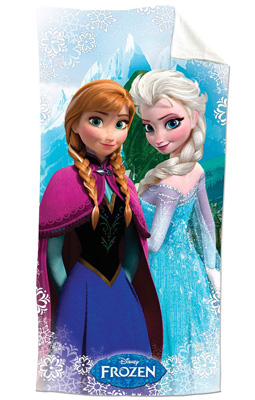 For young fans of Disney’s “Frozen”, a towel such as this one could bring a lot of happiness. It features the two sisters, Elsa and Anna in a colorful image based on the film. Unfortunately, this particular Amazon Prime eligible site has only one available in stock. But, it does list other places to purchase it, and a link to another site that has a newer version available.

Though it is usually the case that Disney products are well made, this particular towel has customers who are not thrilled with the quality they received. The towel has been described as “too thin” and “smaller than expected”. Most have indicated that its worth lies mainly in the picture, which will tend to thrill a youngster even though an adult might find the towel quality lacking. 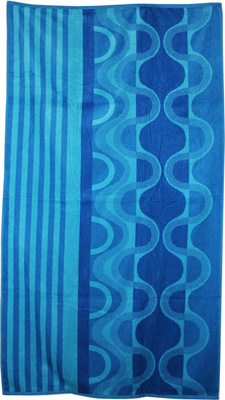 The rich hues of Kerala, India are the inspiration for this towel and its companions in the series. The names speak much about the culture of India and the lure of an exotic getaway. Six enticing designs are available, including Blue circles of bliss, Ayuverdic mystical pours in red, Onam Festival hot pink maze, Niranam sunsets, Blue puzzles and Malabar green circles.

Each towel is made from yarn that is soft twisted. Unique border designs are used on three of the patterns. The dimensions are 70 inches by 40 inches. Each is machine washable and Amazon Prime eligible.

Though India enjoys a good reputation for many of its high quality woven goods, this towel series has had mixed reviews. Customers are divided in terms of their feelings, ranging from anger over loose thread loops, an unreasonable amount of lint, and no plush thickness, to happiness at finding towels with bright designs at a reasonable price. 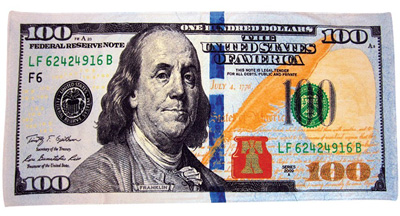 Here is a quirky towel for someone that knows how to laugh. Printed with the image of a gigantic brand new one hundred dollar bill, this is one fun towel. It is made completely from cotton. It measures sixty inches by thirty inches, so it is large enough to make a generous seating spot just about anywhere.

Customers who bought it for fun were happy with the theme. But, many more were unhappy with the thin weight, and described it as not being actual velour as per the description. It could be that this towel is good as a gift as long as it is clearly understood that it’s all about the image. 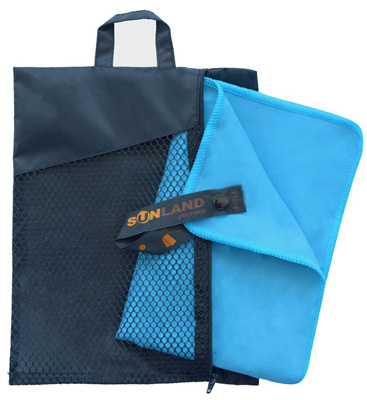 These towels are not your typical beach versions. However, they have many features that are attractive for travelers. It is important to know that the microfiber is a simple blue color, and the edges are nicely finished with a machine finished simple stitch. The towels each come with a coordinated carrying bag, and both have loops for hanging them up to dry.

The company recommends that owners wash the bags and towels in advance. Customers who did not discovered little bits of blue fuzz all over their bathing suits upon first use.

It is possible to purchase them in graduated sizes and multiple lots. From all reports, they dry quickly and are very absorbent, even though they really do not feel the same as regular towels. These are well received by those who used them while traveling. 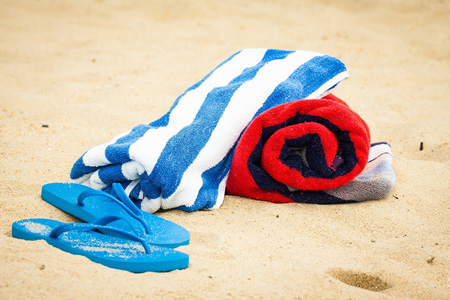 Cabana Stripe is a cheerful collection of easy going towels. Available in five colors including Blue, Red, Orange, Yellow and Green, these are classic patterns for beach or pool swimming days. Made in Egypt from ring-spun terry, this cotton cloth is very soft and absorbent.

Though Egyptian cottons can be some of the finest in the world, these towels have had a few mixed reviews. Some customers absolutely are happy with them, and have used them repeatedly for outings. There is a definite plus for being able to assign different color stripes to each person in the group.

Unfortunately, a few customers noted that their purchases had bare places after using the dryer to dry them. Others mentioned a profuse amount of lint shedding from them, resulting in less thickness after use and the first wash. But, the majority seemed pleased with the absorbent qualities and price they paid for the product. 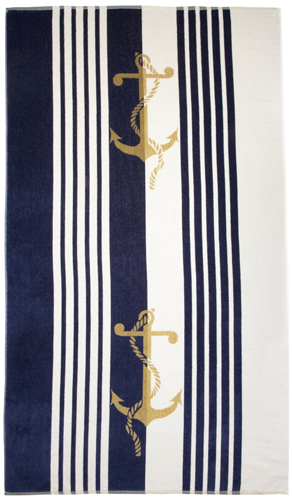 With its jaunty nautical theme, this towel pattern is the perfect choice for someone who spends their time on the sea. It is just one of six designs celebrating the sights and iconic themes of New England as experienced at Newport, Rhode Island. Included in the collection are Anchors, America Pride Sail Ships, Sailing in Style, Sailing Checkerboard, Marine Life and Marine Pride.

The oversized towels are designed to be absorbent and easy drying. Most customers liked the thematic material. Made in India, the weight was described as too thin by some customers. There were others who found that there were tufts of threads all over the other items in the washer each time they washed them. Some described them as lightweight rather than premium quality. 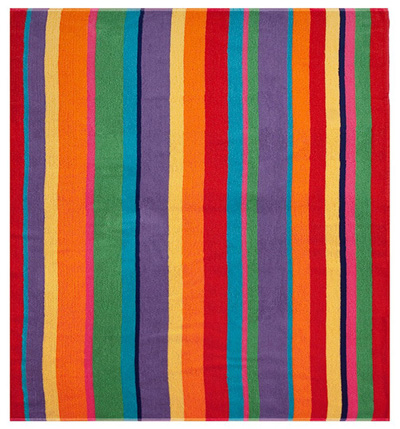 The intensely bright colors of the Summer of Siam towel certainly are festive. This is a very well made product offered for sale by Orient Originals, which is an importer based in New Jersey, and part of an international manufacturing group. Since 1985 the company has decided to provide its customers with high quality goods at reasonable prices. This towel seems to have lived up to the company goals, as customers’ reviews are for the most part, completely favorable. Eighty-one percent of customers gave this towel a 5-star rating on Amazon. Customers mentioned that it is a thick and sturdy product that washes extremely well and holds up without pills. It has a thick velour side that is fluffy and a soft opposite side that resists shedding lint. 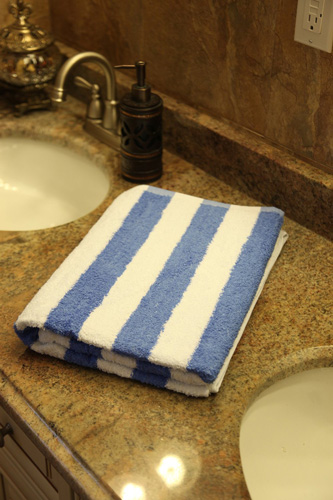 The Utopia Cabana Stripe beach towel is a classic vertical stripe design. It comes in Blue, Orange, Yellow, Red and Green so that everyone can have their favorite color. Families and groups appreciate being able to color code their towels so that none are left behind. Everybody knows which towel’s owner has left it straggling.

These towels are soft, easy to wash and dry cotton. There are those who prefer plain cotton because it is so very carefree. For many customers, they have enjoyed these qualities in this series of towels. Amazon Customer Reviews have 54% of customers giving them five stars, while 25% have given them 4 stars.For those less pleased, comments have generally been about the thinness of the towel fabric, and how they noticed excessive shedding to the point of holes appearing, in some cases. For those well satisfied, they felt that the towels were very absorbent and a good value for their price. 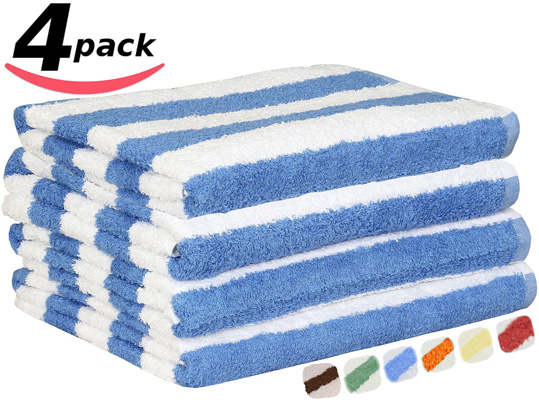 Utopia offers its Cabana Stripe towels in 4 towel packs of the same color. This Amazon URL is one place to order any of the five colors of this collection available at a combo price. For $31.99 for the pack, plus Amazon Prime eligibility, customers get a fairly good deal. This is good news for families who are active in all sorts of sports and water play. The company suggests taking their Cabana Stripe towels along when going to the beach on vacation, when attending workouts at your local gym, and certainly for any swimming days while swimming laps, playing water polo or simply lounging in the sun nearby.

Some families use these towels regularly in their home’s bathrooms. They do so because they find that the ease of washing and drying them makes them ideal for that location. Though reviews about quality are a bit mixed, customers generally like this product because they feel they are getting a decent set of towels for a fair price.

This site uses Akismet to reduce spam. Learn how your comment data is processed.